There have been a couple of branding changes at VMware:

VMware Connect Learning is a huge library of self-paced training and videos which you can use to learn about new technology, new products, new features, or pecific use cases. It has Basic and Premium options which work as annual subscriptions - learn more about it here

There was a promotion started earlier this year which gave a FREE Premium subscription for 6 months - the exciting news (and the reason for this post) is that the promotion has been extended to give a full 12 months access!

There's no reason to wait - the promotion is available til the end of October - head to the subscription page now and sign-up! 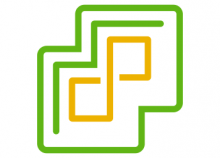 Let’s glance at the increased scalability numbers and see how it can benefit you in your journey towards application modernisation.

Starting from vSphere 7 Update 1, we now support a maximum of 768 vCPU and 24 TB vRAM per VM, leaving competitors far behind in this category. These scales are well suited to support memory-intensive database workloads such as SAP HANA and EPIC Cache Operational Database.

Sphere 7, the new vSphere Lifecycle Manager (vLCM) is introduced. vLCM is a powerful new approach to simplify consistency for ESXi host lifecycle management. Not only for the hypervisor itself, but also for the full stack of drivers and firmware for the server hardware powering your virtual infrastructure. This blog post details vLCM support for vSphere Auto Deploy.

using Auto Deploy, which is part of the vSphere Enterprise+ license, there’s some infrastructural components used. Think about a TFTP host for the boat-loader used by Auto Deploy, DNS and DHCP (configured with option 66 and 67), and a syslog target for logs and dumps next to your vSphere infrastructure that contains the Auto Deploy feature.

Customers have multiple options in Auto Deploy. There’s several configuration options how ESXi is run on the physical host. Options are:

Stateless: Auto Deploy is used to install ESXi in memory on the target host. The state information of the ESXi host is managed by Auto Deploy. No local storage is required.
Stateless Caching: Similar to Stateless installations. However, the ESXi image and configuration is cached on local storage. If communication with the Auto Deploy server is disrupted, the host is able to boot using the cached data.

vLCM (Manage with a single image) the following screen provides information about the prerequisites. 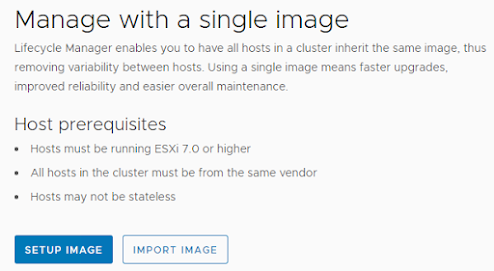 When configuring the Auto-Deploy “Deploy Rule”, select a vLCM managed cluster to be the “Host Location” to use Auto Deploy with vCLM. By doing so, there is no need to provide an Image Profile because vLCM will automatically create it from the selected cluster

Migrate from stateless to stateful

Auto Deploy environment from stateless to stateful? This is as easy as re-configuring the Host Profile used in the deploy rules. Moving to a stateful installation does require host local storage, to verify if your host is equipped with local storage. Be sure to check the url vSphere 7 – ESXi System Storage Changes to get a better understanding of what is required and recommended for ESXi host local storage in vSphere 7.

once ESXi hosts reboot, the ESXi bits are installed on the host local storage. The installation is persistent, fully supported by vLCM

VMware Hands-on Labs are hosted lab environments where anyone can try VMware products with no installation or experience required. Each lab is accompanied by a lab manual which guides the user through a set of exercises used to demonstrate product capabilities and use cases. VMware Hands-on Labs are available for free to anyone and are great tools to learn a new product or feature or even study for an exam. And, since these are fully functional lab environments, users have the ability to go off-script and explore, test, and learn as they see fit.

The new virtual watchdog timer (vWDT) is a new virtual device introduced in vSphere 7. It enables developers and administrators to have a standard way to know whether the guest operating system (OS) and applications, running inside a virtual machine, have crashed. It is an important function for clustered applications to gain high availability.

This means that if the guest operating system stops responding and cannot recover on its own due insuperable operating system or application faults, the virtual watchdog timer is not reset within the allocated time. When this happens, a virtual machine reset is issued. When the system in the virtual machine is booted again, the watchdog timer helps the guest OS to understand if the restart was caused by a crash.

The virtual watchdog device is provided by vSphere, but is configured by the guest OS. It is exposed to the guest OS through BIOS/EFI ACPI tables.

The goal is to provide a watchdog timer that allows the guest OS to use it without the need for additional drivers. To configure a virtual machine to use a virtual watchdog timer, VM hardware version 17 (introduced with vSphere 7) and a guest operating system that supports watchdog timer devices are required. 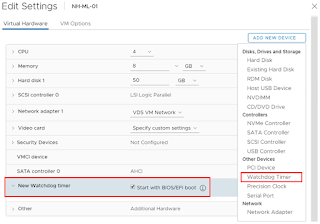 The vSphere Client provides information if the virtual watchdog timer is running on the virtual machine. 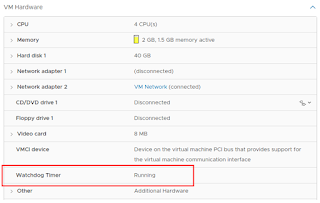 The virtual Watchdog device capability in vSphere 7 is a great addition for VI admins and developers to understand the status of their clustered applications running on vSphere.

vSphere 7, there are some exciting new storage features and interoperability. Under  core storage, we’ve added external connectivity to NVMe device with NVMeoF, shared VMDKs for Microsoft WSFC, and in VMFS, optimized first writes for thin-provisioned disks. On the vVols front, many products our customers use were not supported. Many of our engineering groups have been hard at work, adding support for vVols. SRM, CNS, and vRops now support vVols!

No one really likes RDMs, but in many cases, they are required for clustered applications. In this release, we have added another avenue to migrate off RDMs. VMFS6 with vSphere 7 now supports SCSI-3 Persistent Reservations. Now you can migrate your Microsoft WSFC to VMFS using FC connectivity.

Thick or Thin provisioned disks has, and continues to be, a topic of discussion with each having its pros and cons. The most common con of thin provisioning is the overhead of the first write to unused space. With the new Affinity Manager, that impact has been reduced by creating a Region Map of available resources, thus avoiding the back and forth between the file system and Resource Manager to find available space.

vVols’ increasing growth and adoption has customers asking for support in many of VMware's other solutions. In vSphere 7, there has been a significant advancement in getting vVols supported by other products.

As one of the biggest asks, vVols support in Site Recovery Manager which has been in development for about a year. We showed tech previews at VMworld last year, and there was quite a bit of interest. Numerous customers have been waiting for SRM support before moving to vVols. The wait is over, and it is finally official; SRM 8.3 now supports vVols! For more information, here's the link to SRM.

Another popular request was the support of vVols in vRealize Operations (vROps). The question often arose, “Why can’t we see vVols datastores in vROps, it’s just another datastore?” Well, with the release of vROps 8.1, vVols datastores are now supported.

Kubernetes is quickly becoming the standard for deploying new applications. With its modular and scalable functionality, it allows organizations to quickly ramp and adapt their applications. In vSphere 7, we have added support for vVols as persistent storage in CNS, allowing the use of an SPBM policy to map to a Storage Class. This allows for simplified management of your CNS infrastructure while utilizing the benefits of vVols. With this release, vVols snapshots and replication are not be supported.

VMware Cloud Foundation allows organizations to deploy and manage their private and public clouds. VCF currently supports vSAN, VMFS, and NFS for principle storage. Customers are asking for support of vVols as principle storage; while the VCF team continues to evaluate and develop that option, it is not available. In the meantime, vVols may be used as supplemental storage after the Workload Domain build has completed. Support for vVols as supplemental storage is a partner supported option.

Complexity of Modern AppsWe know that modern applications are rapidly evolving.  They are being deployed more often and are needed faster to meet line of business objectives.  Modern apps can be built using a combination of VMs, containers, microservices and serverless functions.  As such, a hybrid cloud platform that only supports virtual machines is insufficient to meet the needs of today’s applications. 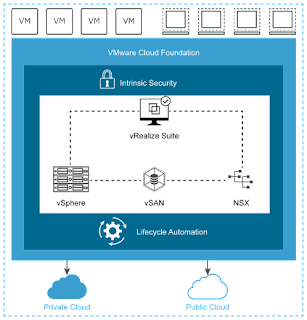 VMware Cloud Foundation 4 brings full-stack integration of the HCI infrastructure layer together with native Kubernetes capabilities built into the stack to provide an automated, turnkey hybrid cloud solution that will help you manage complex Kubernetes environments, deliver a developer experience that greatly reduces risk and increases IT operational efficiency.

By consolidating Kubernetes clusters & VM workloads on the Cloud Foundation platform – managed with existing vSphere tools, processes and skillsets – customers will recognize improved economics.  That same platform can extend across the Hybrid Cloud to deliver the portability of vSphere-based workloads to modern apps.

Thiru
I am a solution Architect offering 16 Years of hands-on experience in hybrid cloud, virtualization, Microsoft technologies, and network infrastructure. I bring an innovative and pragmatic approach to analyze complex business needs, to enable conceptualize, design, and implement cutting edge solutions based on the latest Public Cloud and virtualization technologies.