Preboot execution environment (PXE) to boot a host. Starting with vSphere 6.0, you can PXE boot the ESXi installer from a network interface on hosts with legacy BIOS or using UEFI.

ESXi is distributed in an ISO format that is designed to install to flash memory or to a local hard drive. You can extract the files and boot by using PXE. PXE uses Dynamic Host Configuration Protocol (DHCP) and Trivial File Transfer Protocol (TFTP) to boot an operating system over a network. 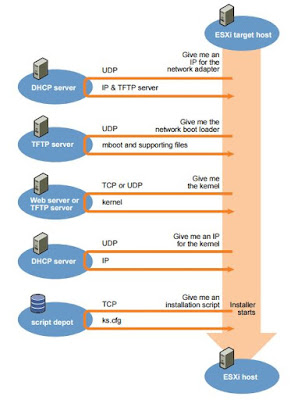 Alternative approaches to PXE booting different software on different hosts are also possible, for example
at December 11, 2015 No comments: Links to this post