VMware announced Project Pacific, what I believe to be the biggest evolution of vSphere in easily the last decade.  Simply put, we are re-architecting vSphere to deeply integrate and embed Kubernetes. The introduction of Project Pacific anchors the announcement of VMware Tanzu, a portfolio of products and services that transform how the enterprise builds software on Kubernetes.

Project Pacific evolves vSphere to be a native Kubernetes platform. What’s driving this shift?  Fundamentally it goes to what constitutes a modern application.  Modern apps are often complex combinations of many different technologies – traditional in-house apps, databases, modern apps in containers, and potentially even modern apps in functions.  Managing these apps across that heterogeneity is a complex task for both developers and operators.  Indeed, enabling dev and ops to work better together is a key problem many businesses face.

When we looked at this space and asked ourselves how we can help our customers here, it was clear that vSphere would play a central role.  But we realized that newer technologies, such as Kubernetes, were also critical to the solution.  So we thought – why not combine them and get the best of both worlds?

This is exactly what Project Pacific achieves.  Project Pacific fuses vSphere with Kubernetes to enable our customers to accelerate development and operation of modern apps on vSphere.  This will allow our customers to take advantage of all the investments they’ve made in vSphere and the vSphere ecosystem in terms of technology, tools, and training while supporting modern applications. 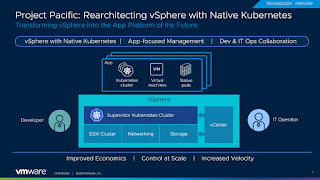 Project Pacific will embed Kubernetes into the control plane of vSphere, for unified access to compute, storage and networking resources, and also converge VMs and containers using the new Native Pods that are high performing, secure and easy to consume. Concretely this will mean that IT Ops can see and manage Kubernetes objects (e.g. pods) from the vSphere Client.  It will also mean all the various vSphere scripts, 3rd party tools, and more will work against Kubernetes.

Rather than managing individual VMs (and now containers!), Project Pacific will enable app-level control for applying policies, quota and role-based access to developers. With Project Pacific, IT will have unified visibility into vCenter Server for Kubernetes clusters, containers and existing VMs, as well as apply enterprise-grade vSphere capabilities (like High Availability (HA), Distributed Resource Scheduler (DRS), and vMotion) at the app level.

VMware’s extensive ecosystem of partners will also benefit from Project Pacific which will enable their tools to work against container-based applications seamlessly and without any modifications. Ultimately, Project Pacific will help enterprises to accelerate the deployment of modern apps while reducing the complexity involved to manage them in the hybrid cloud. Project Pacific is currently in technology preview*.

This is a truly groundbreaking innovation for vSphere.  I’m really excited about our broader vision for helping customers build software on Kubernetes

I will share the update information shortly. I hope this has been informative and thank you for reading!
at September 05, 2019